Dynamic when possible, stable when it should

The UTX SWING is a dynamic long leg brace (also called KAFO, orthosis, or spalk) with a smart locking system designed for people who can not keep the leg stable anymore. The UTX locking system locks the knee if it has to (during stand and during the stand phase of walking), but automatically unlocks at the end of the swing phase. This allows normal a knee flexion during the swing phase. As a result, walking looks more natural and it costs less energy than walking with a stiff leg. At the end of the swing phase, the knee joint automatically falls back into the lock when the leg is stretched and begins to the next step. This way you can walk safely and dynamically again

The UTX SWING is intended for people who suffer from reduced control over the quadriceps and, consequently, can no longer walk safely and stablely.

Common illnesses where this may be the case are (among others):

The UTX SWING is also used for people who have a hyperextension (overstretching) of the knee. In that case, the SWING is executed as UTX POST.

For people who, besides reduced control over the quadriceps, also suffer from a valgus or varus instability of the knee, the SWING can also be performed as an UTX FS.

For the UTX SWING, some residual function around the hip is important. Sometimes it does not work with an UTX SWING. In those cases, a UTX STABIL may be a possibility

Not suitable in case of:

Order codes UTX for the professional

In this video you can see how the orthosis is put on. For more videos about using the UTX, you can visit our YouTube channel.

Coming soon: the UTX selection protocol, if you want to know if and which UTX is suitable for you. You can also make an appointment (in the Netherlands) for a personal trial session.

How does the UTX SWING work?

At the UTX SWING, the knee joint is locked by a simple pal. If this pal falls into its lock position, the hinge locks. There is no flexion (bend) of the knee joint possible.  The pal is pushed in that position by a spring. 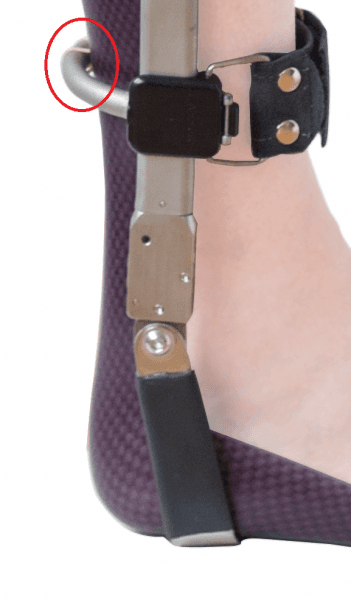 The PUR ophanging of the AFO allows just enough movement in the forward tilt of the leg to unlock the ankle hinge.

There is a cable that runs through the UTX tube all the way to the ankle hinge. During the stand phase the standing leg rotates over the ankle and and foot further forward. This movement is called dorsal flexion. With sufficient dorsal flexion (if the standing leg is tilted sufficiently far forward), at one point, the ankle joint pulls sufficiently firmly on the cable to pull the paw of the knee joint out of the lock. The knee is now free to bend, so that a natural knee flexion can be made during the swing phase and an energetically efficient walking pattern develops.

But only if it is allowed

Dorsal flexion thus leads through a joint between ankle- and knee hinge to unlatch of the knee joint. But what if you accidentally stand on a pebble-stone? Then you may have dorsal reflexes far too early in the phase. Then the knee joint is not allowed to unlock. Therefore, there is added security in the UTX SWING. Dorsal flexion only leads to unlocking if it’s allowed.

The only situation in which it is absolutely safe to unlock the knee joint is to extend the knee (the hinge) when it wants to stretch (make extension). In that situation there is no danger of bending unexpectedly. The knee wants to stretch. Ambroise’s designers have introduced this security through an ingenious system in UTX. The UTX can only be unlocked if there is enough dorsal flexion and at the same time knee extension.

Knee extension is a natural part of the knee movement in the late stand phase (before the knee begins to bend). At Ambroise we have made a safe system that can unlocked at the end of the stand phase and only when it is safe, but in line is with a natural way of walking.

The ankle hinge of the UTX is a nice piece of engineering. Not only is, hidden in the ankle, a connection for the cable that runs all the way inside the tube from the lower leg to the knee hinge and pulls the pal out of the lock at the right time, but the ankle hinge of the UTX has also has a powerful spring. This PUR (Poly Urethane Rubber) ring is attached to a power amplifier. This is a mechanical construction that strengthens the power of the PUR spring by about 10x. Thus, with a rather small spring we can generate enough force to support a foot drop and guide the foot neatly while coming down to full contact with the floor, without a drop.
There is also a clever connection with the ankle strip. This conical connection allows you to precisely adjust the ankle to your situation: The right heel height in combination with the correct timing of unlocking the knee hinge. A precise piece of work that demands the hand of a professional.